‘HELP! I DON’T KNOW WHAT I’M DOING’ And Other Tales, by An Artist.

At the risk of losing all professional credibility and painting myself as insane, I’m about to recount something that happened to me recently. And it’s not a one off. It’s a familiar tale and sequence of events, and one that over the last couple of years has played on my mind and made me ask questions about the way that I and others make arty work. (For those of you that don’t know I’m a theatre type who creates performances and stuff).   I’m doing this because… Truth be told, when it comes to making art (any kind, performance art, music, theatre, writing), I’m a little tired of reading and hearing vague, slightly wanky advice about ‘nurturing the seeds of an idea’ and ‘letting the idea flow with your own consciousness’ or worse still ‘just slow down your thoughts and be more analytical, train yourself to structure your thoughts!’

I think that too often (but perfectly understandably) artists guard their creativity too jealously and that sometimes there’s too much pride involved. I dislike this. I genuinely feel that for the sanity and fruitfulness of the arts industry, it’s important for people to share the shitty-gritty-behind the scenes stuff just as much as the impressive stuff. I feel like the arts industry needs more honesty. So here I am, being honest. I’m putting my hand up and saying: ‘sometimes, I really fucking struggle. Sometimes I have NO FUCKING IDEA WHAT I’M DOING. AND THAT’S OKAY. Sometimes I feel in my very core, that I’m not good enough to do this and these are some examples of when it’s happened.’ I hope in writing this, I can help some people who may also experience similar moments and feelings of despair feel less… alone.

The Anecdote: I’m sitting at a table with my creative peers and we’re brainstorming thoughts for a show or a game and someone suggests that we each go home and come up with an idea and some examples of how it could work or be developed. My insides freeze, and my brain is about to explode: I DON’T HAVE ANY IDEAS. I HAVE NO IDEAS. OH MY GOD. I NEED TO COME UP WITH AN IDEA.  Despite the clusterfuck of panic and turmoil taking place inside my head, I smile and say with as much enthusiasm as I can muster: ‘Sure, sounds good!’ We are a team, after all, and we all need to contribute.

– Here I am looking composed and totally ‘with it’. I’m actually bricking it.

The following week is torture. I keep sitting down with my notebook open, waiting for creative inspiration, an idea, an ANYTHING to come to me, and… nothing. Instead, there’s white noise, and phrases like ‘this is stupid’ keep floating across my mind’s eye. By the time it comes to reconvene and share our ideas – I have been through hell and back. There have been tears, there have been sleepless nights, and there have been endless discussions inside my head about why the fuck I just can’t DO IT.

The ‘idea’ that I bring to the table is small, half formed and explained with utmost hesitation and therefore poorly articulated. I listen to everyone else’s ideas and am riddled with a mixture of relief, anxiety and self-loathing. Relief, because I’m glad other people have ideas that I can back – seeing as I have convinced myself that my own one was so rubbish. Anxiety, because I’m stressing out about how to make my own idea look like it just came to me and therefore it doesn’t matter if it’s a bit shit and not used, because whatever *shrugs*, it’s cool, I’m creative and totes intelligent ya. And self-loathing because I 100% recognise that:

a – I’m being ridiculous and neurotic and it’s not helping in the slightest,

b – Actually I really do want to bring good ideas to the table that are taken on board and used, but my fear, anxiety and neurosis doesn’t let me commit to that desire, so I instead focus all my efforts on being an idea-backer for other people rather than having conviction to really push my own.

And c – because I actually don’t know how the hell the others came up with their ideas. I’m aware that I’m projecting these visions of creative brilliance onto them and in turn projecting the image of dunderheaded idiocy onto myself … and all without a shred of knowledge of the journey that they’ve been through to get to this point. All I have is my own experience.
And that’s the key:  All I have is my own experience.

For all I know, other people also have phases where they feel like utter dunces and think everyone else finds it a breeze. For all I know, my peers went through the same frustrating journey that I did.  In the arts industry, we don’t often talk about these difficult details when it comes to creating work and sharing our practice – admitting publicly that you have self-doubt is unspokenly frowned upon. As a result, in these moments of dark self-doubt, it’s incredibly hard for me (and, I’m sure, many others) to NOT feel like it’s down to personal inadequacy.  The thing is, deep down, I know that creativity isn’t always easy. I know it’s sometimes about mind-set more than anything. I also know that I can’t be the only one who struggles to collect my thoughts or generate material in this way. But honestly, when no one else talks about these kinds of struggles, I forget all this logic and become consumed. So, in an attempt to get past that, here I am sharing!   Below are a few other small examples of spectacular creative fails I have encountered:

I bought the notebook, I made sure it was the right size and shape and bendy and felt good when it was both open and closed and had lined paper in it, so I could also draw pictures with guidelines if I needed to. Then every time I opened up the book to let my creative juices flow… Nothing. The most that kept coming out was ‘hello, my name is….’ I drew a few flowers. I made endless lists. Practical lists… Shopping, to-do, hours of overtime worked, etc. Not much else. 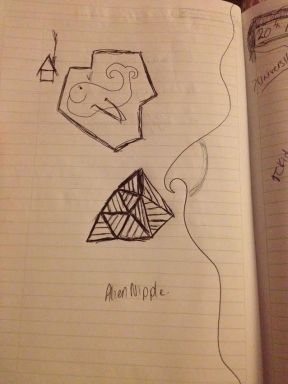 I spent ages mulling something over, and then finally, AHA! It was an idea! A wee seedling, waiting to be nurtured! I sat down and made some notes and was all ‘FUCK YEAH!’ Then I tried to tell it to someone, and it just didn’t make sense. Out of my own head, it didn’t exist as an idea, only as gibberish. Even as I was telling it, my brain was racing ahead of me and laughing, saying ‘Dude, what the fuck are you talking about?’

This one is pretty self-explanatory. Sometimes the ideas I put forward come too soon in the process and therefore no one else understands the relevancy of them or remembers that they were suggested when the time is right. Other times it’s just because I am so nervous about putting an idea out, that I royally cock up the articulation of the idea, and therefore no one really gets it or has confidence in it. Not even me.

So I’m walking around being like ‘hmmm what inspires me? What can I turn into an idea?’ And then BAM. Too much time in my own head results in having a massive freak out about the logistics of being an arty type trying to survive in a world that doesn’t nurture creativity. I instead sit on a bench, eating cheese singles, and cry publicly about how I will never make my parents proud, own a home, or have recognised ‘career progression’ the way other people do.

After doing things like writing exercises, improvisation, list making, idea bubbles, mind maps, inspiration walks, singing, and Yoga and STILL being unable to make sense of an idea or come up with anything coherent – I just gave up. I decided, clearly trying to force art out of me was not working. I would just have to stop thinking about it and let my natural creativity take over when I wasn’t expecting it.  A week, 2 weeks, a month passed by… And still nothing. No flash of inspiration. No great tidal wave of understanding. Just nothingness. I started making lists again.

Yeah, this one happens ALL THE TIME. And that’s okay. But it still sucks ‘cause it can fuel thoughts like ‘I’m so shit’ and ‘What the fuck was the point’ which then repeat every time you’re going to try something new. The trick is to just… Understand that some ideas are used, and others are not. One day you’re a hit, another day you’re a miss. But the more you dwell on your misses, the more you’ll miss. That’s what I’ve found.

So there you have it. I have talked about my moments of fear, stupidity, and utterly irrational thinking because not enough people do. The less we talk about this sort of stuff, the more we create an industry that is filled with individuals swimming in uncertainty, self-doubt, and shitty confidence. And that’s dangerous. It’s dangerous to our industry as a whole and to the individuals that are in it.  Maybe it’s specific to the way that I think, and maybe you don’t agree, but I’d rather admit to my fellow artists that I am vulnerable and uncertain and have to work my brain and butt off to make shit happen, rather than paint a picture of infinite knowledge and endless creative finesse. I feel that through this sharing we can stop each other from feeling alone and out of it form bonds, camaraderie and support networks that will allow us to flourish as an industry rather than constantly question our value. To be honest, if just one desperate person who has been questioning themselves and the arty work they do has stumbled across this and realised that creative block, insecurity and fear about your work is TOTALLY NORMAL AND HAPPENS TO EVERYONE – I will be happy.  And if nothing else, you have indulged in a delightful sense of Schadenfreude at my expense.

← Why arts companies need to be better at making money…
The Arts Industry – Who is it for? →