When Theatre and Gaming Meet – Part 1

As a company we (Block Stop) say that one of our core aims in the work we do is to explore a meeting space between gaming and theatre. Sounds pretty darn exciting right? Well we think so. Anyway, it probably makes sense, therefore, to type down some of our thoughts so far on this and where we’ve got up to in our exploration. I’m going to talk about this in the context of our current project, Dead Wait.

So the basic concept of Dead 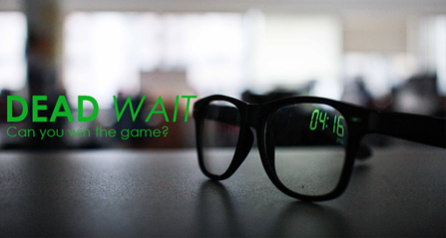 Wait is that you, the player, instruct and guide Sarah Parker, the protagonist, via internet technology, watching the action unfold from Sarah’s 1st person view perspective and talking to her through a headset. Sarah has been kidnapped by a mysterious criminal and your job is to help her as she navigates a series of difficult choices and challenges. For more info check out the webpage: http://blockstop.co.uk/dead-wait.html.

But what of the whole theatre-meets-gaming quest? In what ways does this project attempt to merge the two experiences? Well, as we got to thinking about it we decided to grab a few different of (what we think are) core elements of theatre and of gaming and to attempt to splice them together to make something that we hope is a bit new and incredibly exciting. So I’m going to spend the majority of the rest of this blog post talking through those elements and how they work in the context of Dead Wait.

I’d originally hoped to cover this all in just 1 blog post but, actually, there’s quite a lot I want to cram in so thought I’d split this into 2 parts and focus just on the theatre side of things for this 1st one.

The element of theatre I want to discuss is ‘liveness.’ Ok so this can be a bit of a loaded term which could mean a few different things to different people but hey, most words are… I guess that’s just the nature of language. Anyway, I’m not too interested in getting into a semantics argument (not now anyway) so I’ll just explain what I mean when I use this word. ‘Liveness’ is that feeling you get when something is happening right now, that, ‘you shoulda been there man’ kind of feeling. In the context of theatre, ‘liveness’ steps it up a gear being more like that feeling that something is happening right now in a shared space that you yourself are a part of. This is why film and theatre (and even live TV) will always be very different mediums because with theatre the action is taking place live, right in front of you, in a space that you are a part of and, because of that, you are affecting the performance and the experience just by the fact that you are there. Cool right?

It can be quite a difficult one to explain but any theatre goer knows, like an inbuilt awareness that we all have even if we can’t express it, that there is something so unique about being in the theatre space watching a performance that is just not the same as watching something on a screen. Anyone who has watched a recording of a theatre performance, or even a live-streaming, would attest that it is never as good as being there, in the ‘live’ audience. Similar things could be said about the difference between listening to the radio and going to a ‘live’ concert.

Ok, so some of you might be thinking, ‘but live-streaming is live… the clue’s in the name’ or even, ‘well games can also be live, they’re called online games,’ and actually the truth is that yeh… you have a point. This is where the awkwardness of the word ‘liveness’ really starts to show up. Maybe it’s less helpful to think of the action as live and more helpful to think of the space as live because, ultimately, there’s something about that connectedness in theatre between yourself and the performers, in the shared live space, that makes it u

nique. So maybe we should call this ‘mega-liveness’ or, you know what, let’s just call it intimacy; the ‘liveness’ of theatre creates a connectivity and intimacy in a way that is just not there in other mediums.

This sense of intimacy cannot be created via live-streaming because you have absolutely no tangible connection to the action. Online games are perhaps less clear cut but, in my opinion, the sense of intimacy is not as intense as a theatre experience and perhaps that is due to a mixture of: the shared space being virtual instead of physical, online anonymity and the fact that you’re sat in the comfort of your own home (i.e. the familiar and the ordinary).

Right. So how have we incorporated liveness and intimacy into Dead Wait? It is true to say that, in all honesty, the player and the actors of Dead Wait don’t share the same live space at all; the player is in a room by themselves and the actors are performing in some, potentially distant, location; so in that sense it is a very different experience to a traditional theatre one. However, the spaces are both physical spaces, not virtual ones, and the intimacy and connectivity between the live audience and live actors, I have to say, is pretty gosh darn intense. The fact that the player controls a live actor rather than a virtual character gives the project an ‘intimate liveness’ and an undeniable theatricality that is very different from a traditional gaming experience.

Really not trying to blow our own trumpet but the show does play with and take advantage of liveness in a really amazing way and I think that is demonstrated by the fact that the whole show depends on the interactions and contributions of both the actors and the live player, it just couldn’t work without them and that means that every single performance is entirely unique. That is to say that the whole show absolutely has to be live for it to function as it does.

It is also worth commentating on the fact that a lot of people have asked us why we don’t present Dead Wait as a purely online game that people could do from the comfort of their own homes. Maybe this is something we will consider much later on but we can’t help but feel that there is just something really special about going out and coming to a neutral space – a kind of magic that intensifies the experience. This would get somewhat lost if you were playing the game in your pjs with a mug of tea in your hand and Fluffles the cat purring at your feet. In short, it would feel less intimate.

So all of this is not to say, ‘check us out, we’re amazing’ (although we do hope you check us out and find our work exciting), rather it’s to say that we love theatre, we think it’s awesome and it’s important to us that our work reflects this. We hope you agree with us and, if not, come see our show and hopefully we can make you rethink that.

That brings us to the end of part 1, I can’t wait to do the next post on the gaming side of things. Hopefully that will be appearing very soon.